NextMistakes Were Made: My PC
Feature

With every generation of console comes more and more new features that often wow gamers, or sometimes they don’t.

Take for instance, the PS2 and original Xbox, which both came with DVD players built in. The original PlayStation, which released during the age when arcade cabinets were far more powerful than the home console, brought that quality of experience to gamers without needing to shovel quarters into the machine. I mean, you still could if you wanted to, but it wasn’t necessary at least. The PS3 and Xbox 360 standardized wireless controllers and HDDs so you can avoid memory cards. The original Xbox introduced console players to online play through Xbox Live (notice I didn’t say all gamers, since PC players have been enjoying online play as a standard since the dawn of time). The Nintendo 64 introduced us to the Rumble Pack, which was later adopted by Sony and Microsoft as a controller feature.

Of course, not all innovations were that great. When the Xbox One was first announced, Microsoft unveiled that they were going to require players to maintain a constant connection to the servers to play their games, leading to an uproar among gamers. Interestingly enough as a side note, that persistent online connection became a requirement in many games despite initial complaints; now it’s uncommon for the average person to be upset by a game requiring a connection to play, or to access the full features of a game.

While the Xbox One stands as a case study of what not to do with a game console, it doesn’t stand alone. The N64 had one of the most bafflingly designed controllers known to man, with the Dreamcast following suit by taking an excellent design and reserving a large portion of the controller for a seldom-used screen. The Sony designed the Dualshock 4 controller to have a giant flashlight and touchpad for… reasons.

That’s a lot of controller complaints… It’s safe to say that the GameCube had one of the best controllers known to man though.

They also chose to not include a 4K Blu-Ray player in their premium version of the PS4 Pro, and while most users these days still don’t own a 4K display or have any 4K movies, it’s a remarkable omission considering even the Xbox One S has one.

I have to stop myself before I get too carried away, or I’ll continue ranting for another 4,000 words, you’ll get bored (if you haven’t already), and I’ll get too far off track. The point of this post is for me to outline my wishlist for Xbox Series X features that I’d like to see come to fruition. So enough dragging my feet. Let’s start!

Yeah, there are eight ideas. I’m too lazy to come up with ten. Make your own list if you want more.

Just include these with the console…

Personally, I’ve never had much of a problem with the Xbox 360 or Xbox One controller batteries. It’s inconvenient to need to have a pack of AAs lying around, or needing to buy an additional accessory just to be able to avoid paying exorbitant prices to just use my damn controller.

The fact that rechargeable batteries, “Charge & Play” kits, or controller charging docks are basically a necessity at this point is irritating to say the least. I do love the efficiency of Xbox controllers, because they last roughly 40 hours for me (leagues better than the horrifically over-designed DS4), but needing to spend the extra ~$25 for a battery solution is absurd in this day and age.

Microsoft, take a page from your development of the Elite v2 controller of yours and just include an internal battery finally, or at least throw in a Charge & Play kit.

The PlayStation and Nintendo got this one right, and frankly I’m very surprised that Microsoft botched this one. Of the myriad of capture options available to Xbox One users, it’s basically impossible to transfer screenshots and videos from the internal hard drive of the console to external storage. Your only options right now are to either have a USB device set up as a media storage device ahead of time, download the files directly from Xbox Live on a PC or smartphone, or manually upload them to cloud storage or social media.

These options work relatively well, but heaven help you if you just want to move files to a USB device retroactively. It probably wouldn’t be nearly as bad if it weren’t possible on both the PS4 and Switch, where you can transfer files to a USB or SD card respectively.

Microsoft, this is such an easy feature to include. Make it happen.

I don’t understand what happened between the release of the 360 and the Xbox One, but I distinctly remember being able to set the option to have default control options set for games so you didn’t need to make changes for every single game. Things like choosing your Y-axis invert preference, whether or not subtitles are on, what sensitivity you prefer, and others.

I get that there’s probably some integration hurdles to deal with, and it’s probably not that big of a deal to make changes in a new game, but I remember not being required to edit my control settings in-game. Y-axis inverted, subtitles off, high sensitivity.

Microsoft, save me that time. All ten seconds of it per game. 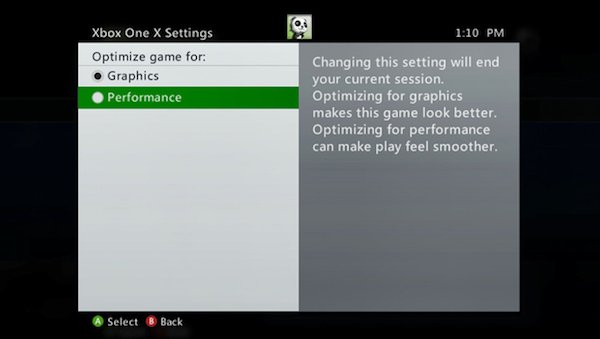 This already exists for 360 games. Source: The Windows Club

This is one of those things that’s relatively new to consoles, given that now we have multiple SKUs of consoles this generation, with the standard and premium options. Both Sony and Microsoft have made it possible for gamers to make choices about what they prefer from the Xbox One X and PS4 Pro, performance-wise. Do you want higher framerates or 4K? HDR on or off?

Similar to the last request, I would love to be able to set default options, but not just for controls. I want to be able to make default graphics settings. I want the option to lock FPS or set a cap, prioritize FPS over resolution, and possible to enable V-sync in games (though these options are definitely limited by developers I’m sure).

Microsoft, I know you don’t have a lot of control over whether or not this becomes a feature, but you’d be my favorite if it happened. Unless you had nothing to do with it.

The Xbox One already gives gamers the option to set up app/game groups that can show up on the Home page of the UI, but being able to customize even more of the UI would be fantastic. For example, I don’t care about the Mixer or Community pages (I’m antisocial). So if I could prioritize the Home, GamePass, and Store pages while hiding the things I don’t care about, that would be awesome.

Microsoft, the PS4 kinda has this feature, so there’s no reason you can’t do it either.

I get that this was started to compete with PlayStation Plus, but I barely take advantage of the games given away as part of Games With Gold anymore now that GamePass exists. What’d be really cool is if Microsoft kept GamePass but got rid of Games With Gold, and used the savings from paying for those games to be a part of GWG in favor of making Xbox Live Gold free.

Microsoft, I know it isn’t going to happen, but one can dream.

Ditch the ads on the UI so people stop complaining about it.

It’s awesome that Microsoft has been investing in new studios to develop first-party games, but like most others, I’m a little concerned that there won’t be much aside from the usual stable of Halo, Gears of War, and Forza games to look forward to. The Xbox brand has so many unused IPs that could be brought back from the dead, like Crimson Skies, Perfect Dark, Lost Odyssey, and Brute Force. There are also a number of games that were Xbox exclusives, like Jade Empire, Advent Rising, Mech Assault, and Blood Wake that Microsoft could potentially resurrect.

I’m relatively optimistic that Microsoft has plans in place for new IPs as well, and the multiple developers brought into the fold have some awesome ideas ready for next-gen, but there’s no need to leave unique IPs like the ones above to wallow in obscurity.

Microsoft, let’s see some new and exciting games, but don’t assume that you can’t reach back across the generations for ideas.

That’s about all I have, but that doesn’t mean this is an exhaustive list. I’m not content with the idea that the Xbox Series X will only be a more powerful Xbox One platform. Microsoft has the capability and know-how to make tremendous improvements besides the predictable increases in processing power.

What are some things you think Microsoft could do with the Xbox Series X?