This Is The Police Review

Ever wanted to pretend to be a police chief?

No, this isn’t a game about the band who performed that extremely creepy song about stalking a woman. This is about running a police station in a fictional city where the police and government are horribly corrupt, and you’re thrust into the role of a police chief on the tail end of his career.

Sounds interesting? Well, this might be the game for you. 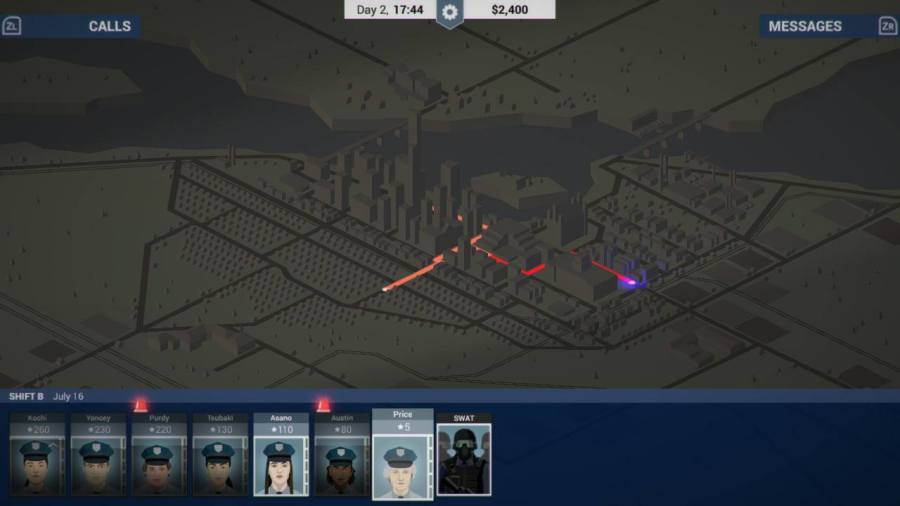 Can’t I just deploy the SWAT team to every call?

I honestly felt like I didn’t start the game at first. The beginning portion of This Is The Police is a deluge of images and dialogue, setting the stage for the tone of the rest of the game. It’s very reminiscent of going to the movies, where you spend the first twenty minutes of your experience watching the trailers for movies yet to come out, resulting in you forgetting what movie you actually came to see.

Once you finally get to play however, it’s easy to understand the concepts behind the gameplay. You function as the police chief for the city of Freeburg, managing your police officers in an attempt to use them as effectively as possible.

That last bit is rather obvious I guess…

My point is that it isn’t always easy keeping the ball rolling. Your officers have differences in professionalism, faults, beliefs, and capability, and leveraging those characteristics is paramount to success. You’ll need to separate the wheat from the chaff, and you’re going to have a ton of chaff to get rid of. The only problem there is the fact that you can’t just fire a “bad” officer on a whim, as you can invite repercussions for doing so. That doesn’t mean you’ll be able to hire a crack team of professional police officers 100% of the time either; you’re going to need to make compromises to keep the streets relatively safe from your citizens.

You’ll also be required to split your pool of talent between two shifts, and while you can pull people in to work doubles, you’ll risk putting those officers at risk. On one particular occasion, I had to decide if I would let an officer have the day off because he stayed up all night drinking. I didn’t have the availability to allow him to have the day off, and I felt a little offended that he wanted me to reward his irresponsibility by giving him an extra day off, but it resulted in him dying in a car crash while responding to a call.

It’s important as well to try to ensure that your officers responding to calls have a high enough level of professionalism (measured by the number under their portrait), and that you have enough highly-ranked officers on shifts to inspire your other officers too. Furthermore, if you’re sneaky enough (and lack scruples), you can also gain insight into your officers’ political affiliations and personal traits. That in itself can make it a little easier to maintain unit cohesion and to increase the chance of success on calls.

Unfortunately, because of the randomized nature of call outcomes, it’s possible to find yourself at severe disadvantage rather easily. In one particular case, I sent a higher-ranking officer with an extremely high level of professionalism on a call to with two other officers, only to have them all gunned down by one assailant. It was a response to a possibly stolen vehicle… Now, I know that crazy stuff can happen, but it makes the game extremely difficult when a third of your unit can be wiped out at random.

That said, the purpose behind your actions is to generate cash for yourself, through both legitimate and illegitimate means. 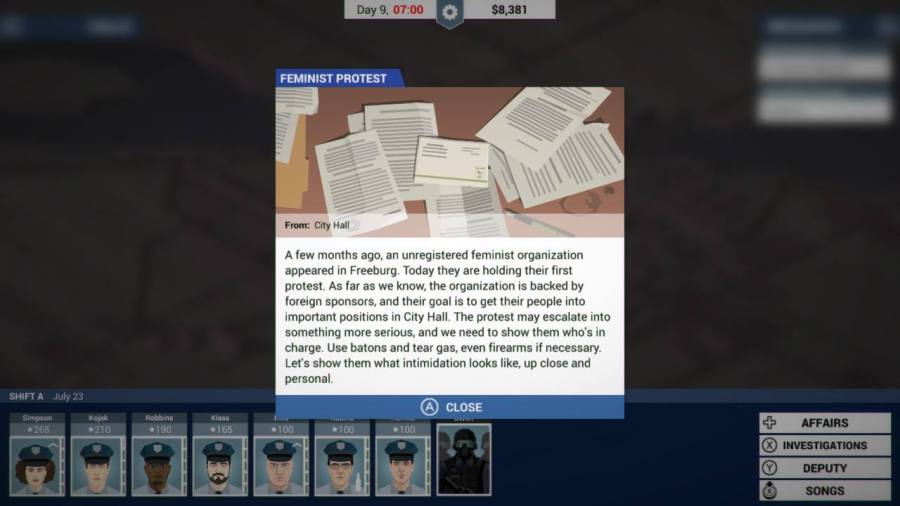 I’m not one to demand specific design aesthetics, and I feel that makes me appreciative of many different types of games. I personally have found the design chosen for This Is The Police to be appropriately satisfying. For instance, in an interesting twist, the only characters who have faces in the game are the police officers themselves, though I don’t know if that was done intentionally for any other reason that to help with players differentiating between them in the roster. Similarly, very little (barring the ludicrously lengthy intro) is animated, with the majority of your visual input being delivered in the form of still images and text.

Perhaps one of the things I enjoyed the most about the game, is it’s surprisingly satisfying inclusion of the ability to purchase vinyl records to listen to when performing your daily duties, and the music itself is wonderful. Don’t worry though, it isn’t DLC… It’s all purchased using in-game currency, though the records are stupidly expensive. I’m not sure why hyper-inflation is rampant in Freeburg, but maybe that’s the source of the social issues ever-present in the city.

The UI itself is easy to understand, though on the Switch I had an initial roadblock when grasping the control scheme when not in handheld mode. It admittedly took me a while to understand that I had to use the shoulder buttons access certain parts of the interface. 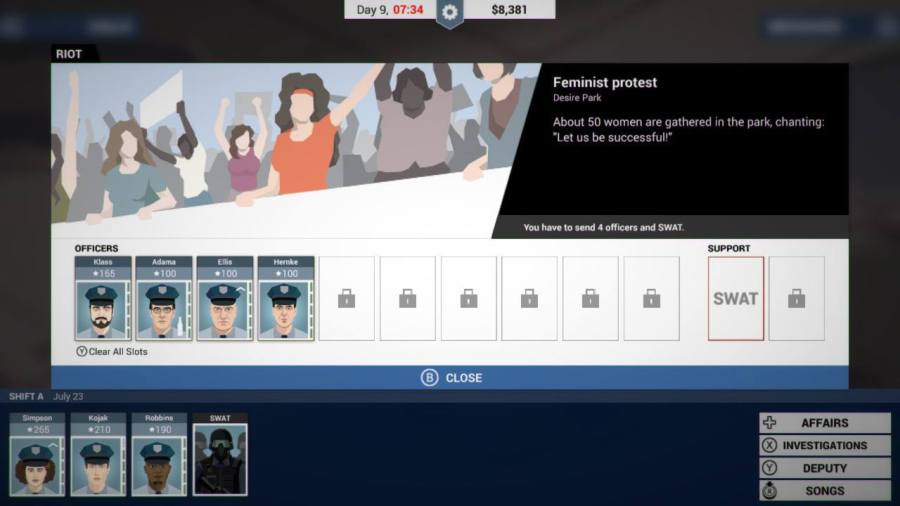 Of course, it’s the control scheme where the majority of my issues cropped up. I feel these issues are likely entirely avoidable when playing on PC, where a mouse and keyboard would be much easier to use in contrast to a gamepad. At one point though, I had to abandon the use of my Switch in handheld mode to complete the tutorial for SWAT deployment (pictured above), as the touchscreen controls didn’t allow me to place the SWAT team card into the appropriate slot. It was easily fixed, but it was irritating nonetheless.

I love games with a unique sense of humor

Upon starting This Is The Police and watching the graphic novel style story being told, I was immediately reminded of Max Payne. It’s clear that Weappy Studio drew inspiration from comics and graphic novels when crafting their game, and the story itself is very reminiscent of gritty detective stories, where corruption is rampant and the police aren’t necessarily the good guys.

I also find games with a unique sense of humor to be refreshing to say the least, and This Is The Police has that in spades. At times, that sense of humor is rather warped, and the dark side of society is used as a means to leverage that humor, but I enjoy it anyway. 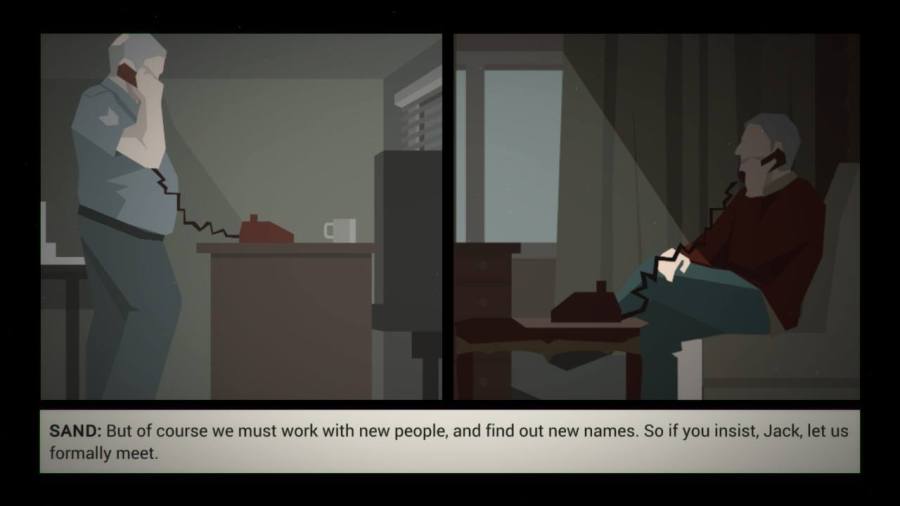 Say hello to over half of your experience

I’ve always been transparent about my love for narrative focused games, and while I do love stories, I never found myself enjoying the one presented in This Is The Police. To me, the mechanics are what makes the game fun, and while the story itself provides the reason for your actions as a player, it isn’t engaging at all. If anything, once you finish watching the introduction and go through the tutorial, the rest of the story is rather pointless.

I get it, the government of Freeburg is corrupt, but the main character’s motivations are to make enough money to retire on, not solve the problems of the city. Granted, the late game introduces a twist, but that’s too little too late in my opinion; getting through the story is a chore, as after about a dozen days, the formula gets stale and repetitive. Perhaps the story was meant as a way to alleviate the limitations of the gameplay, but I couldn’t find myself enjoying the experience much longer. It seems like the more reasonable option would’ve been to just shorten the game instead of dragging it out over the course of 180 days. 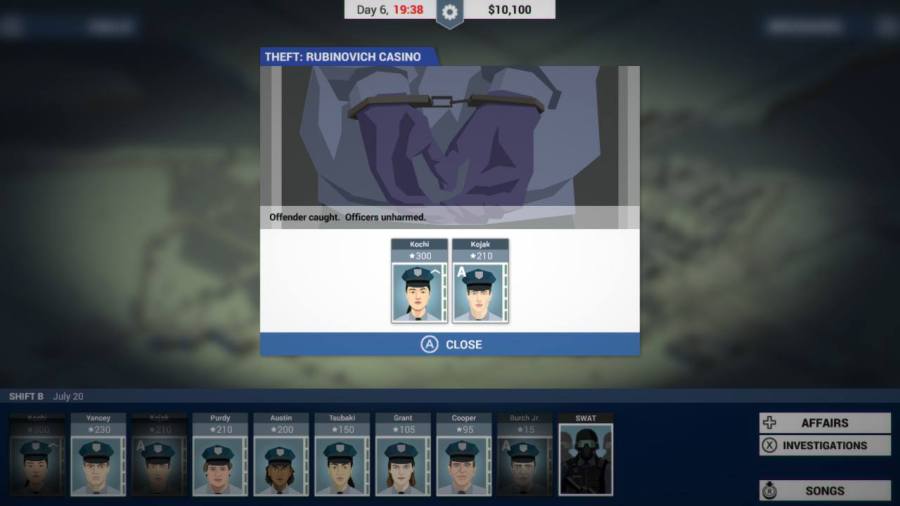 I understand the atmosphere Weappy Studio wanted to create with This Is The Police, but I honestly feel like the ultra-grim portrayal of police in Freeburg was poorly implemented. There aren’t any characters in This Is The Police that are likeable, aside from maybe a couple who can at least be sympathized with on some level. All the government officials are corrupt, and in bed with criminals. All the police are flawed, and some (like the main character) are downright evil; stereotypically so.

I suppose this atmosphere might be appealing to those that are typically critical of police and government, or are looking for a social commentary of sorts, but there isn’t much substance here to sate those folks either. The fact is that This Is The Police lacks the teeth required to make a meaningful statement. It introduces issues of racial tension, feminist activism, police brutality, criminal interference in government, government corruption, and more. However, like many other games that take this approach, a controversial issue is used as a medium to tell a story, but nothing is said. 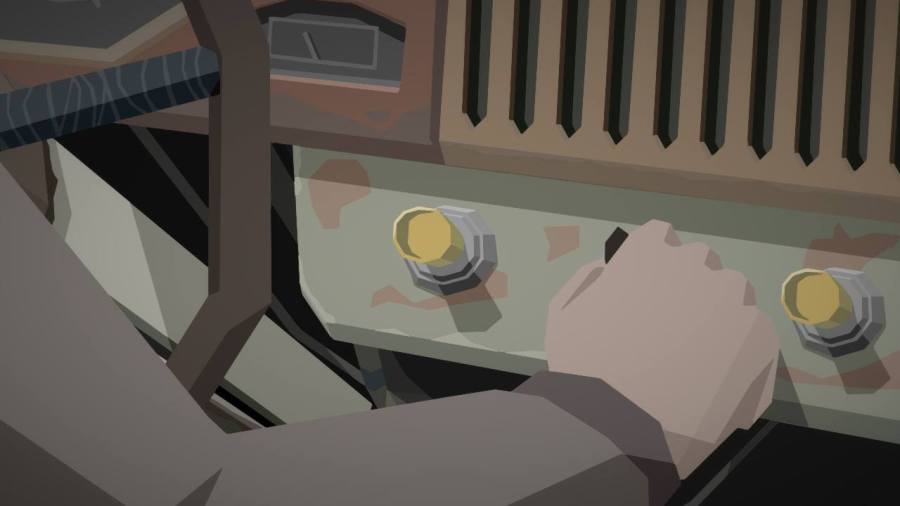 I love management games, and strategy in general. It’s safe to say that I deeply enjoyed the mechanics of This Is The Police, but that’s essentially the only part I liked about it. The story itself is comically extreme, but it’s overwrought and frankly uninteresting; it overstays its welcome. That said, it’s a fun game for a while, I just wish that it was a little shorter. Having to endure 180 days is tedious, and while the late game changes things up a bit, it takes so long to get there, which is saying something when the game is as short as it is.

Seriously, how can a game as short as this feel so long?

Anyways, if you’re in the market for a management/strategy game, take a look at This Is The Police. At least on the PC, where it’s probably at its best.

Have you played This Is The Police? What are your thoughts on it?