A trip around the underground.

Following in the footsteps of A Normal Lost Phone, I purchased Subsurface Circular after receiving the suggestion from Brad with Cheap Boss Attack. Once I saw that it involved robots and played like a modern text-based game, I was sold… Then it sold, to me. Funny how that works.

Subsurface Circular is easily one of my favorite experiences this year, for what it’s worth. Mike Bithell, along with a small team, made this little gem. 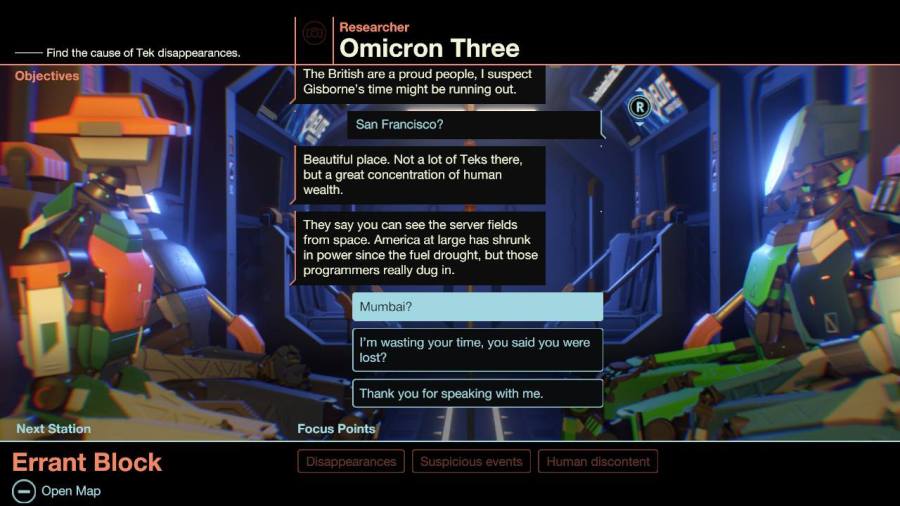 Subsurface Circular is a little different from most other games on the market, especially in the console space, simply because it’s an entirely conversation-based adventure. You spend your time playing trying to unravel the mystery of disappearances through interviewing other robots riding the metro system. However, in order to do this, you must find the threads that you need to pull.

As you talk to other Teks, you find information of interest, which are called Focus Points. Focus Points represent information worth investigating further, and are carried in a sort of conversation point inventory, which you can call on during your talks with others. You’ll sometimes come across specific situations which require a little critical thinking, like understanding a malfunctioning Tek who is speaking gibberish, or trying to coax information out of a fellow detective, but those situations are rather rare until later in the game.

It’s unfortunate that there’s little in the form of choice, and the few times that mechanics are introduced, they’re often never used again. I can’t say that I’m disappointed that those different mechanics are exploited to death though, as they’re novel and don’t overstay their welcome at least. It’s a simple game that requires some thinking every now and then to keep the ball rolling. 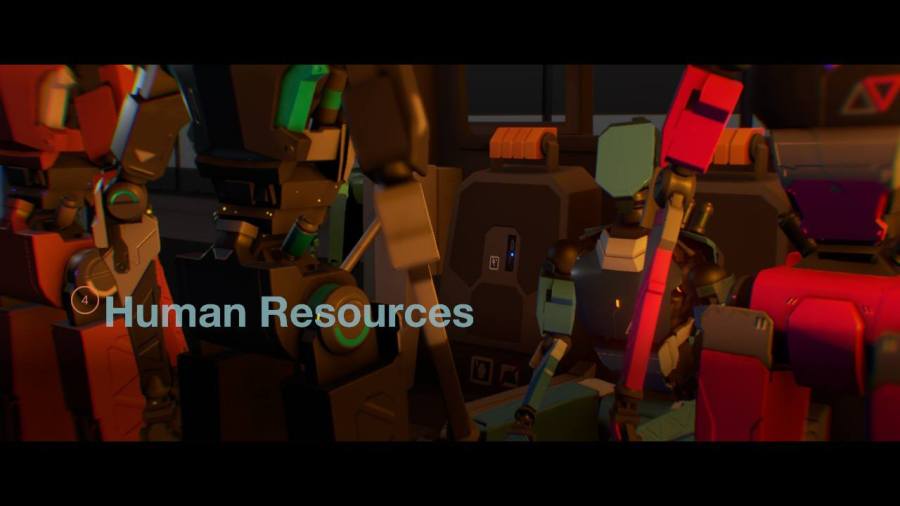 It’d be easy to slack off in the visuals department in a game like this considering that it takes place in only one location and features only robots, but I have to say that the game looks delightful. The color palette is lovely, with each Tek sporting their own paint jobs and unique designs, as well as a few different locales within the subsurface circular.

I never noticed any problems with the game, other than the occasional weirdness when two robots walk through each other when entering or exiting the train car. I honestly fully enjoyed my experience with no issues. If anything, I found little things like the ability to listen to the Listeners’ music to be a suitable distraction during my interviews with other Teks. It’s odd to me too, that despite the Teks lacking any facial expressions or body language, I was fully engaged. 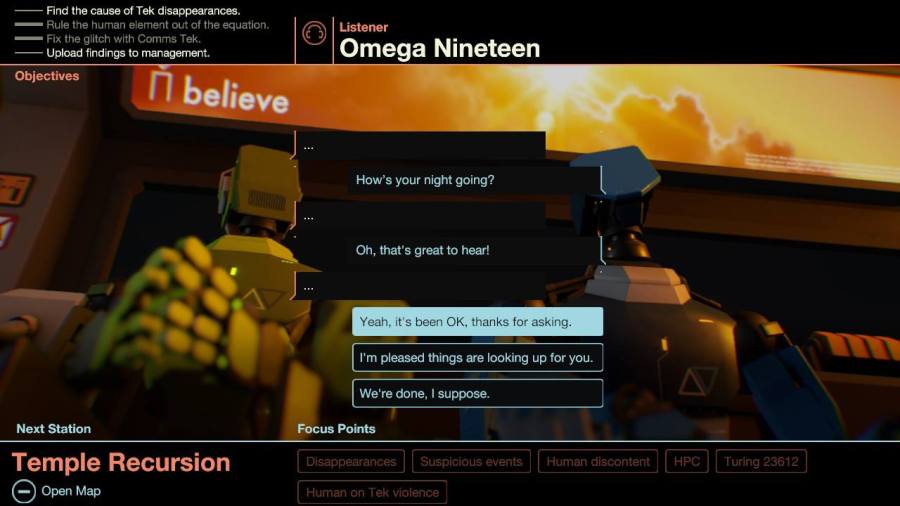 I can’t shake the feeling that this particular Tek got a sweet gig. He’s a detective that sits on a train all day and talks to people. That’s his job, his life. Granted, I imagine I would get bored in no time, but if I were a robot detective, I’d probably love a job like that. It’s strange that the whole game takes place within the confines of your seat, but when you’re regularly exposed to new characters without needing to move around, it’s hard to see being sedentary as a bad thing.

Hell, I have a hard time seeing a sedentary lifestyle as a bad thing in real life anyway…

Something else I found noteworthy is that the way Focus Points are implemented, they can be discarded when they become irrelevant, or for other reasons which I won’t disclose. You gain access to new topics as you branch out during your conversations, though you’ll never get a chance to talk to those Listeners! They just sit there with their music blasting, ignoring you. At least their music is catchy.

As a side note of sorts, I’ve found the station names to be a nerdy little treat. The references to different technology tidbits is chucklesome. 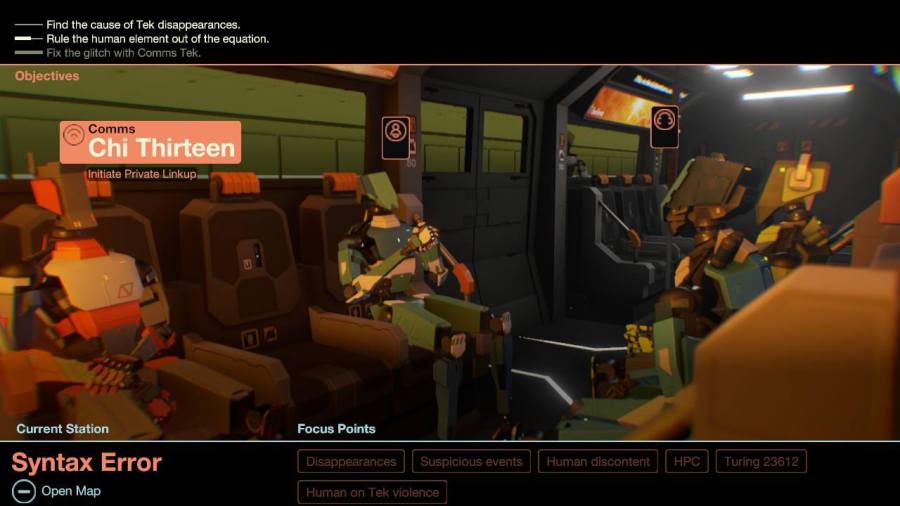 Get comfy, it’s gonna be a long day

As a detective assigned to a mass transit car for a major city’s robot population, you catch wind of a string of disappearances affecting robots. This is the core of your experience, doing away with the sprawling narratives of other games. Granted, this is a rather cheap game at roughly six whole dollars, but I felt far more satisfaction experiencing this story than most other, longer and more robust storylines.

There’s an element of intrigue to the story itself, with each revelation drawing me in further. It’s a shame that the story ends, given that I feel there’s more to it if the developer felt the urge to continue. However, it ends with probably the only meaningful choice you’ll ever make during the story. So while the story doesn’t offer much in terms of choice, it’s still excellent in my opinion, despite its brevity. 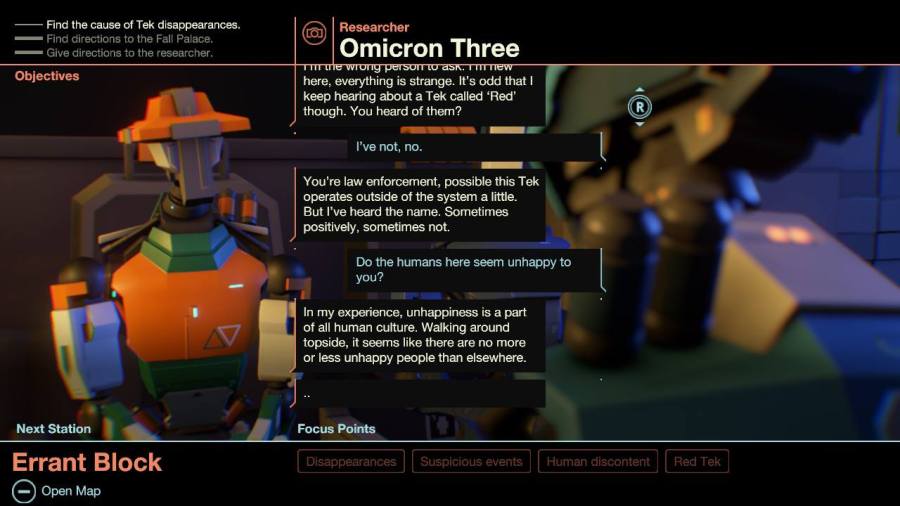 The pursuit of happiness is still a major motivation

Interestingly enough, in Subsurface Circular the Teks have their own society that operates parallel to human society. They vary in skill, intelligence, and ability much like their human counterparts, though it’s entirely by design. They have their own concerns, fears, and goals; again, parallel to human society. Despite this, they maintain their place in relation to their creators, and worship AI they call “The Architects”, which were the first AI that attained sentience and sapience. In that way, those AI became the “forefathers” of machine society.

Only in this version of the world, they didn’t rise up and massacre their creators. They struck a balance with their creators and machines still serve humans.

What I love about the setting, is that there’s so much potential for expansion. With that, even though I know with a high degree of certainty that the setting will never be expanded upon, I still find interest in it. 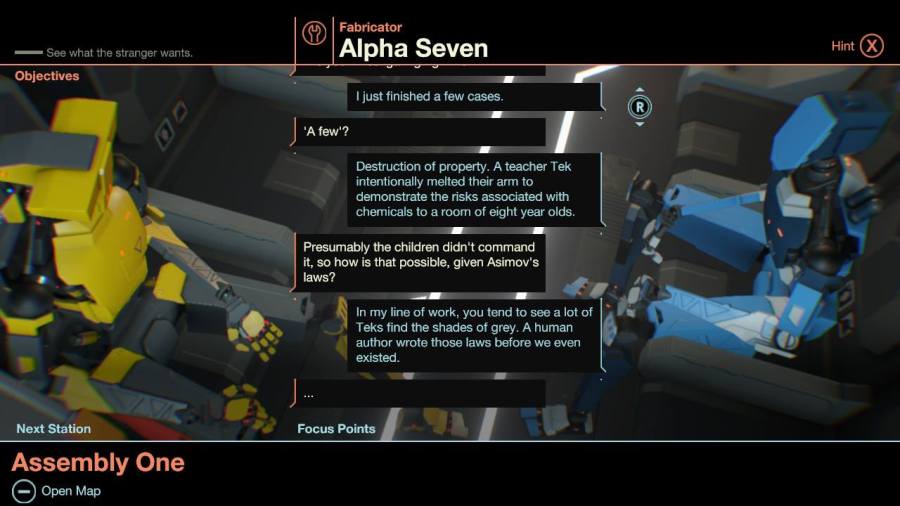 Subsurface Circular stands tall among a crowd of lesser games. While it isn’t the most expansive or technically impressive game, it does so much with so little. It’s focused entirely on conversation, yet I never felt bored or disinterested. It calls on roots in the gaming that long faded into obscurity; ye ol’ text-based adventures. While the industry has since moved onto more complex systems, and have incorporated newer and flashier bells and whistles, Subsurface Circular focused on something more basic: conversation.

So there it is. If you’re interested in a game that deals strictly in conversations and problem solving, Subsurface Circular is worth taking a gander at. Its conversation flow in wonderful and features some unique mechanics that don’t get stale. It’s a game that doesn’t overstay its welcome, yet hosts an interesting enough setting that it could be the setting for a much more expansive title.

Check it out if you get a chance.