5 Changes That Would Improve No Man’s Sky Dramatically

Instead of requiring you folks to click a link to see the article, I’m going to start just including the post here with a link at the top and bottom of the page.

No Man’s Sky has set the gaming community on fire this last week, engulfing the Hello Games crew in the firestorm of criticism and praise that is usually reserved for monolithic companies like Ubisoft or Activision. Regardless of the detractors’ or evangelists’ opinions of the game, it’s clear to me that Hello Games needs to keep on top of things by making improvements to their work.

I’ve had so much fun playing No Man’s Sky over the last week because it scratches that itch I have for science fiction stuff. Sure, it’s no Mass Effect but there’s something calming and endearing about visiting countless worlds without the constant nagging feeling of the fate of the galaxy being in the balance. After putting in a likely unhealthy amount of time into No Man’s Sky, I (with the help of my wife) have come up with five changes that Hello Games can make to the game to improve upon it.

1. Get Rid Of The Stamina Meter

Running is so exhausting…

Stamina meters need to die in exploration games. I totally understand that it isn’t physically possible for a living being to sprint forever but when the worlds you visit can take hours to walk across and there are supposedly over 18 quintillion planets to visit, time is of the essence. The problem I have with not being able to sprint indefinitely is that my player character doesn’t need to eat, drink, sleep, or excrete. So why draw the line at running?

It’s more than just a convenience issue though. I’d love to be able to move more freely outside of my ship at least to get around quicker while not using my ship, not to mention that it’s also a safety concern. Running away from a nightmarish creature in No Man’s Sky often devolves into jumping on a rock and trying to shoot it from afar. Perhaps I don’t want to be forced to kill every creature that attacks me. They don’t know any better after all; they’re just looking for their next meal.

Except Megachicken; shoot it on sight.

I know I parked that ship somewhere…

Early on in my time playing No Man’s Sky, I made a tremendous mistake. I preordered the game so I received the Alpha Vector Ship, which came with a fueled up hyperdrive. I didn’t warp to the next system without the plans to create a hyperdrive though, so I wasn’t stuck in the same boat that others were in. Instead I completed the part of the introductory quest that gives you a warp cell and added the additional fuel to my preorder bonus ship. Now, normally that would’ve been fine had I just continued on to the next system. I would’ve received the warp cell blueprint and gone on my merry way. I didn’t do that however.

What I ended up doing is I found another crashed ship and fixed it up because it had more cargo space than my other one. Except upon leaving the atmosphere of the planet, I realized that I had no warp cells and no plans to build another. Abandoned somewhere on Nova Ticlan’s surface was the fueled-up Alpha Vector Ship and I was floating around the star system hoping to find a replacement warp cell. The good news is that I eventually was able to buy one.

Long story short, this all could’ve been mended by the ability to call back my previously owned ship at a landing pad. Being able to call back previous ships would also allow a player to have multiple crafts for multiple roles. As of right now, players are limited to one ship, which would be fine except when I fix up a crashed ship on a planet’s surface, I’m forced to leave one behind that is in perfect working order. At least give us the option to sell the thing at some point to make some extra cash. 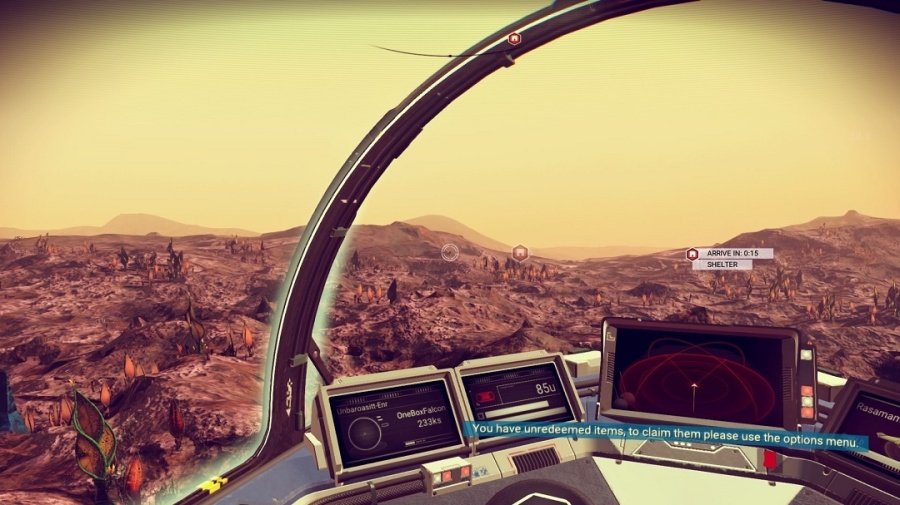 Something that I really appreciate about Elite:Dangerous is that you can plan where you’re going to going to arrive in a star system before you travel there, allowing you to explore a system without starting at some arbitrary location next to the star. No Man’s Sky doesn’t necessarily need something exactly like this (it would probably not be possible anyway). Instead, Hello Games should implement a way for players to create waypoints in star systems and on the planet’s surface that are customizable.

I’ll be more clear, when you find a new location via a beacon or scanning, the game places a waypoint for that location on your UI that shows the general direction and time required to get there. This works most of the time, but if you highlight too many locations without visiting them (or end up getting a bugged location) it clogs up your HUD.

Also, why can’t you simply clear out your waypoints? It becomes a particular problem later when you end up fully upgrading your inventory space and attempt to search for shelters on a planet. Regardless of your lack of need for new inventory slots you are still sometimes given waypoints to drop pods. Perhaps it would be possible to delete waypoints from your list of places to visit, be able to prioritize which ones you want to see, or create your own waypoints entirely. One can dream.

4. Include Some Truly Undiscovered Planets As Well As Some Colonized Ones

I guess an entire space station beat me here.

The idea of being the first one to set foot on somewhere on a planet is something that I remember being touched on in the book-turned-movie The Martian.“Everywhere I go, I’m the first. It’s a strange feeling.” I wished that No Man’s Sky carried with it that same feeling. I understand the limitations and I believe I have an idea of where Hello Games was coming from with their design, but much of the wonder is soured when you touch down on an “undiscovered” planet only to find beacons, settlements, and ruins every 100 meters.

Hello Games patched in the addition of dead moons and low atmospheres so the addition of planets and systems with little to no presence of other sentient life is hopefully something they will add later.

Something that I hope also makes it into the game is the possibility of coming across some populated areas in No Man’s Sky. There’s already a massive presence of alien lifeforms throughout the galaxies, so running across at least a couple densely populated areas would be wonderful to behold.

5. Some Multiple Biome Planets Would Be Cool

I’m beginning to think that I’m being too picky.

This particular thing is used so often in science fiction that single-biome planetsare considered to be a trope of the genre now. Sure it’s cool to run across your first ice, water, or tropical planet but it starts to get a little old after a while. I’ve only visited about five systems in total (I tend to scour places for resources like a locust) and I’ve run across at least 6 toxic planets so far. In fact the planet Nova Ticlan was toxic too, and it was my starting location.

I suppose what I’m suggesting is that a little variety would be nice to see. More Earth-like planets with varied climates instead of just temperate forests blanketing the entire world. With it, Hello Games could implement a way to see where the poles are and the equator too. I get the feeling that implementing a change of that magnitude would break the game though.

So what are some changes you’d like to see in No Man’s Sky? Do you think it’s the way it should be already? Leave a comment below!