The Double-Edged Sword Of Immersion

Or is it a dunk tank?

Everyone has their own idea of what makes a game immersive. The characters, the story, the setting, or the mechanics; their roles in a video game are what draws a player in and keeps them at the controls. Every developer attempts to immerse players in their own crafted universe, in one way or another.

But what is immersion, and is it possible to be too immersive?

Google told me that immersion is the action of submerging someone or something in a liquid. Thankfully, video games aren’t drowning us each time we turn on our PCs and consoles. Instead, we need to look at the secondary definition of immersion, which means the action of involving oneself deeply in an activity or interest. There we find the meaning of the word that actually matters to us, outside of scuba diving and bathing.

Immersion in video games, or any media for that matter, means to lose yourself in whatever you’re partaking in. You lose track of time, playing into the wee hours of the morning. Some game developers seem to think that to immerse players in their game, they need to make things as close to reality as possible, which just isn’t true.

My current obsession is Kingdom Come: Deliverance, which I would contend to be immersive. However, it isn’t immersive because the developers focused so heavily on realism as inspiration. Sure, the combat isn’t as wonky as Skyrim and creating potions means actually following a recipe to the letter, but those quirks in and of themselves don’t make the game immersive to me. It’s the fact that I have fun every time I play it. I look forward to coming home and booting it up to venture off into the woods to wipe out bandit camps and make off with their ears, or deliver a sermon (Henry was a renaissance man before it was cool).

Not many games suck me in; immerse me in the game, if you will. Horizon: Zero Dawn, Watch_Dogs 2, and The Elder Scrolls IV: Oblivion were immersive to me. I got invested in what they had to offer, because they offered something I was looking for. Horizon: Zero Dawn drew me in with its wonderfully crafted lore and beautiful visuals. Watch_Dogs 2 hooked me with fun gameplay and funny, yet endearing, characters. Oblivion sent me down a spiral of madness by being the first experience I had with a massive fantasy RPG outside of World of Warcraft.

Were these games too immersive though? I’m going to say that no game can be too immersive, at least not in the definition that we’re using. A game that’s too immersive would cause you to abandon your life for the sake of playing the game. We’d be venturing into something like The Matrix if that were the case.

However, I think there are developers that try too hard to make their games immersive. They fall into common traps, like focusing too much on the minutia, focusing on graphics over anything else, making a huge world to explore, shoehorning in character customization, or trying to capitalize on fan service.

Modern gaming has proven to be rife with this problem. So many games on the market today are trying to compete for more and more of our time, and with developers trying to find ways to keep players playing longer, they attempt some combination of two options: trickery or immersion.

Some developers have gone full Ubisoft by making every game take place in a massive open world, regardless of whether or not it’s necessary or warranted. Games like Mad Max and Mirrors Edge: Catalyst have gone that route. Games like Destiny and Metal Gear Solid V: The Phantom Pain introduce character customization that does absolutely nothing to expand on the experience, other than pad the beginning of the game with busywork. Then there are the graphics powerhouse games, like The Order 1886 and Ryse Son of Rome, which are just glorified tech demos. And don’t forget the fan service in games, because if anything is going to keep players involved, it’s going to be animated sexual content.

There isn’t anything wrong with the inclusion of any of the things I listed above, except in the examples I gave. Character customization can make a huge difference in getting the player to invest themselves in their character, like in Mass Effect. Open worlds can be expansive and still be featured in immersive games, like Fallout: New Vegas. Some games can look good and retain the necessary features that keep players coming back for more, like with Horizon: Zero Dawn or The Witcher III: Wild Hunt.

Making a game immersive isn’t as simple as just making the game look better or adding different features. If that were the case, then we’d see dozens of bestsellers every year. Instead, we see a ton of okay games, with a few gems and stinkers.

I want to roll back a bit, and talk more about Kingdom Come: Deliverance. Yes, yes… I know you’re probably tired of me talking about it, but I have a reason. You see, Warhorse Studios billed the game as a more realistic experience, ditching sorcery and mythical creatures for a historical take. It works, but only with concessions. You can heal yourself from mortal wounds with a few bandages, sleep, and whatever the hell is in those Marigold concoctions; along with some extremely thick plot armor for Henry. 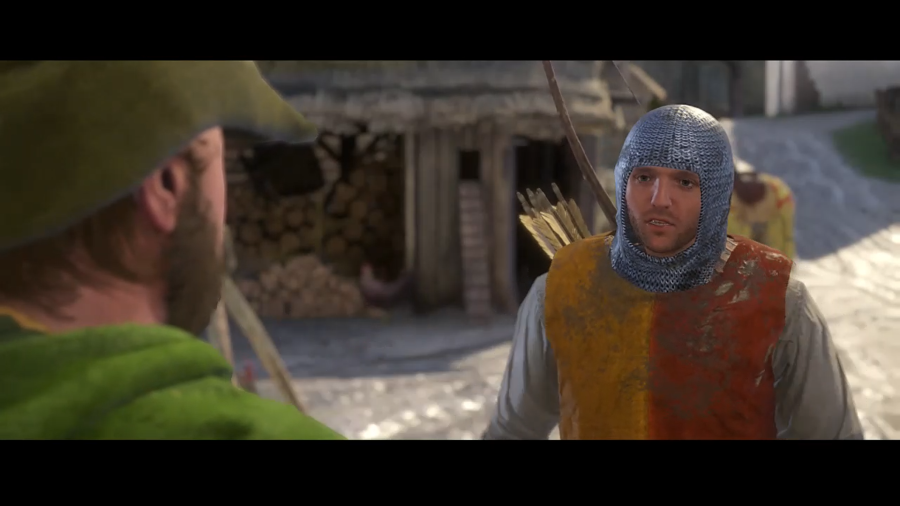 If only his plot armor looked a little cooler

What works for Kingdom Come: Deliverance is that it’s just real enough while still being entertaining. It isn’t enough for it to be realistic; it has to be fun too.

That’s where so many games miss the mark I think. Developers look at games like Skyrim and think, “Oh! All you must need is a giant open world with some stuff to do!” or they see the success of games like Mass Effect and say to themselves at board meetings “We can do that! Just throw in some branching dialogue and make it so they can mess with the player avatar.”

I’m not the first to point out how developers and publishers like to jump on bandwagons of course, but that’s what often happens. In the pursuit of sucking players in, they attempt to hit all the talking points, and sometimes aim to make their game as immersive as possible. Whether through attempted realism, gigantic worlds to explore, or customization options, they throw everything they can stay the board to see what sticks. Trying to implement features into a game which are supposed to grip players’ attention can backfire, or simply miss the mark. If only more developers and publishers could see that what makes a game immersive takes more than hitting a few bullet points.

I don’t mean to make it sound like it’s easy to catch lightning in a bottle. In fact, sometimes you just get lucky. Sometimes the features that people like about your game aren’t like by others. Dark Souls is a great example of that, with its intense difficulty being praised by some and loathed by others. Immersive games take careful planning and execution to pull off, and it’s that approach that can help game developers accomplish what they’re aiming for.

Of course, that would mean that their publishers need to let go of the micromanagement and just let developers make the game they’re envisioning. Then again, I might have no idea what I’m talking about.

Good thing I made this an opinion piece!

What are your thoughts? What game just took you by the throat and dragged you off into the wee hours of the morning? What do you think gave it such a grip on your soul? Let us discuss!

The Uninteresting Life and Times of a Sewer-Dwelling Console Heathen

The Uninteresting Life and Times of a Sewer-Dwelling Console Heathen