NextWhat Ever Happened to Mass Effect: Andromeda? Part I
Review

Well that was a mouthful.

I’ve made it no secret that I love Horizon: Zero Dawn, so imagine my delight when Sony presented the trailer for The Frozen Wilds at E3 this year.

To all other developers out there, this is how you do DLC. The Frozen Wilds is a substantial addition to Horizon: Zero Dawn, which can be accessed once the player completes the quest, A Seeker at the Gates (when Aloy becomes a Seeker and can venture out from the Embrace). Don’t you fret about retreading any areas you’ve been to, because this adventure takes Aloy to an entirely new area to learn more about the Banuk, and to figure out what the hell is going on in the north. Namely, why there are new, menacing machines on the prowl in Banuk lands.

Taking shelter to escape the snow for a while

The Banuk territory Aloy heads to in The Frozen Wilds is inhospitable, both because of the environment and the machines that reside there. The entire region is appropriately named, since it’s blanketed in snow and ice, and it’s wild as well. The machines you’ll run into aren’t the run-of-the-cauldron types. These are new beasts, with all manners of dangerous tricks.

It’s true that you won’t find yourself running up against nothing but new threats though. There are the normal types of enemies, such as Scrappers, Longlegs, and whatnot roaming around, but those enemies are no slouches either. They’re liable to rip your face off even quicker than their southern counterparts. It’s definitely recommended that you only head north once you’ve hit level 30 for this reason.

It’s worth mentioning as well that the new area is gigantic. Taking place in the distant future of Yellowstone National Park, that immense size is pretty appropriate. It isn’t the same in size as the original map, but still rather large; it looks to be about a sixth the size of it. Additionally, there’s quite a bit to do, with Aloy taking part in a wide range of activities. Some will be familiar to players, like collecting items for exchange with merchants and hunting challenges. Others involve disabling Control Towers, or as I like to call them, flower towers. 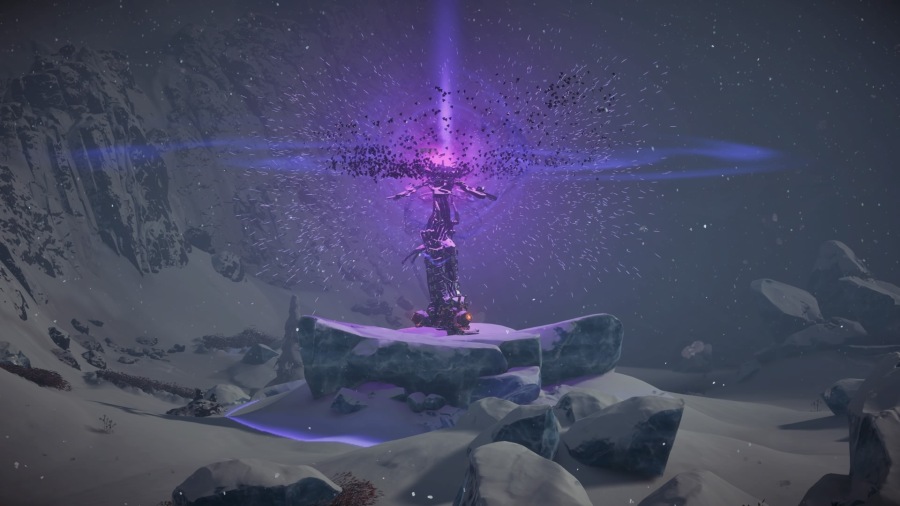 Speaking of machines, the new variety of enemies in Banuk territory are exceedingly dangerous. They behave like the corrupted versions, making them immune to overriding and having larger health pools, in addition to dealing out more damage. The new enemies are even more volatile. For instance, the first new baddie you run into is called a Scorcher, and well… it does well to hold up to its name. At the very least, Aloy won’t be cold when going up against a Scorcher.

Perhaps the only complaint I have with the gameplay is that Aloy seems unfazed by the cold, regardless of her complaints to the contrary. I would’ve enjoyed a mechanic that penalized swimming in the ice-cold waters; something like a health drain for being submerged. I know it’s just a game, but it seems odd to me that she’d be fine in the sub-zero temperatures despite being soaked to the bone in frigid waters.

I immediately forgot about my complaint regarding the cold not affecting Aloy when I witnessed a squirrel scrambling up a tree as I was hunting him. Sneaky bastard.

Aloy doesn’t always get it

There are a number of interesting folks that Aloy bumps into during her exploits in The Frozen Wilds, like Gildun and Varga. Both Oseram, they’re big personalities who make a big impact (in my personal opinion), despite holding only bit parts in the story. They not only add levity to the story, but they seem like the genuine article. The other characters follow the general pattern of tribe members; grounded in superstition and rituals.

Granted, it makes sense in the context of Horizon: Zero Dawn‘s setting, but it didn’t feel very original to have to go through the same type of dialogue that Aloy waded through with the Nora the first time around. Despite this however, the Banuk are still an interesting tribe, and it’s nice that there’s a little more substance given to the tribe that Sylens came from. Aloy needs to work with the Banuk after all, to learn why there are even more big bads popping up in the area. Does Aloy need to head up north? Well, no… She’s just a curious mind, interested in learning everything she can about the machines and the “derangement”.

That isn’t to say that I didn’t find issues with the story though. Without going into too much detail, playing through the narrative arc of The Frozen Wilds leads Aloy into challenging a tribe leader for his position. But as far I can tell, Aloy does little with the title other than giving herself access to the next part of the story.

Those issues aside, the journey into the north is remarkable. It’s difficult to not admire the scenery, and the variety of content and additions to the game make the package that much more complete. The Frozen Wilds doesn’t just add story and large swath of ground to cover, but also arsenal of new equipment to play around with. Higher class versions of existing weapons are present, but that’s not all. There’s a new class of weapons to play with, of the elemental damage throwing variety.

That’s right… You get the Horizon: Zero Dawn equivalent of a flamethrower!

The rest of the changes made to the equipment table allow customization options for Aloy’s spear and new armor with up to four mod slots. Sure, Aloy doesn’t need any more help to be a badass, but it never hurts to turn away the helping hand. Mostly because that leg up will almost certainly be welcomed by all players. After all, what’s the point of giving someone awesome toys to play with if there aren’t new things to test them on?

What’s on the Horizon? Get it? (Did I already use that one?)

So you may be wondering what the verdict is regarding The Frozen Wilds. Well, what would you think if I told you that it offers a complete story, significant lore (of which there are already plentiful amounts), excellent modifications to the gameplay, a massive and beautiful area to explore, and even more savage machines to annihilate?